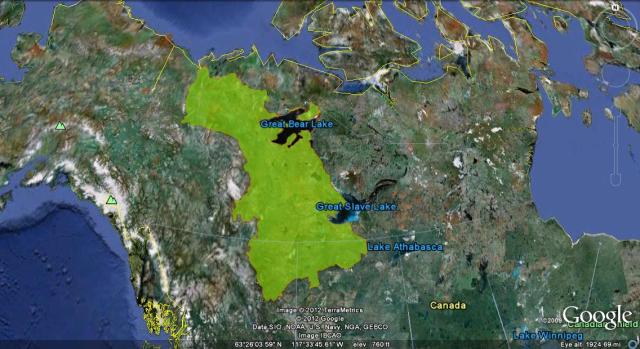 The Taiga Plains is one of Canada’s Ecozones, a region what is classified as having distinct ecological, climate and landscape features. Centered around the Mackenzie River, it covers a significant area of the Northwest Territories but extends into British Columbia, Alberta and the Yukon Territories.  A full description of the Taiga Plains Ecozone and its floral and faunal characteristics can be found here and here. A detailed map of the NWT Taiga Plains and its ecoregions can be found here.

The Taiga Plains is ideally suited for the study of permafrost thaw since it covers >50% of the NWT continental land mass over a wide latitudinal range, and therefore includes a wide range of permafrost characteristics. Furthermore, this region is home to a large proportion of the Northwest Territories’ population thus understanding the implications of permafrost thaw-related changes in this region is critical for successful climate change adaptation planning in the NWT. Widespread ecosystem changes occurring as a consequence of climate warming and human disturbance, include but are not limited to: permafrost thaw-induced conversion of forests to wetlands on discontinuous permafrost and a greening of the tundra via shrub expansion promoted by active layer warming and thickening on continuous permafrost.